Exciting stuff in the cycling press last week, as Team Sky announced their team for the 2016 Tour de France. Slightly dispiriting news for those of us who measure our life in Tour de France, however, as another year is about to tick by.

Chris Froome is there, of course, in defence of his title, supported by Thomas, Stannard, Rowe, Kiriyenka, Landa, Nieve, Poels and Henao. It’s been described as perhaps the strongest team ever sent to a Grand Tour, largely by bored people on social media. That description was then picked up and reported by bored people in the actual media in lieu of a meaningful story.

The internet is great, isn’t it!

“It’s the strongest team ever”, they say, “get yourself to your favourite online gambling site and place a tenner on Froome to win, and also gamble responsibly…” they seem to be suggesting.

If I’m honest, a similar announcement of the Tinkoff team for the Tour passed me by, but I expect that when ‘colourful team boss’ Oleg Tinkoff named the squad assembled to support Contador they were gushing in similar fashion in Tinkoff-land (because let’s be honest, he doesn’t live in our world).

All the big players are currently talking themselves up whilst picking their words carefully, so as not to reveal even the tiniest chink in their amour. 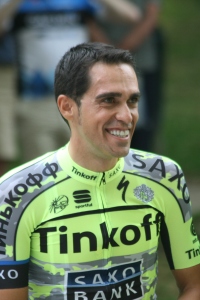 In the Sunday papers this weekend Froome was telling his rivals how fresh he was feeling pre-race; proof, in my book, that he hasn’t been quite the hands-on-nappy-changing-2am-wake-up-call new dad that his rivals might have hoped. He was also bullishly reminding his rivals that in the closing stages of the Criteruim du Dauphine recently he was at the front of the race and surrounded by menacing looking team-mates. In other words, the Team Sky machine is in full effect.

‘I know it would dissuade me from attacking a rival if they had three team-mates on hand…’, was the gist of his analysis/threat.

Alberto Contador is reeling off the usual pre-race quotes, in that strange way that Spanish sports-speak translates into English, and talking about being in a ‘nice moment’ and feeling ‘good sensations’; let’s be honest, it would be a lot more interesting if he outed himself as a closet Beach Boys fan and was picking up ‘good vibrations’ too, maybe with teammates Rafa Majka and Peter Sagan doing the ooohh-eeeeh-ooohh’s and the ooohh-bop-bop’s in the background.

Quintana is just being nice to everyone, and occasionally unfurling that man-of-granite-thousand-yard-stare that is his trademark. If anything, beyond Froome, the political infighting/ego-driven power struggle in his Movistar team between Alejandro Valverde and people-who-aren’t Alejandro Valverde might be the biggest threat to his bid for glory.

For Fabio Aru and Vincenzo Nibali, and their Astana crew, who knows what the story will be?

They are not so much well-oiled corporate entity/bike race winning machine, as mercenary band of rebels. Their public pep-talk will probably be something aggressive and unpleasant from team boss and man-with-a-history Alexander Vinokourov, I’d imagine.

But back to Sky, and it falls to me to point out the glaring omission (no, not Wiggo, he’s moved on folks). Does my succession of top 50 placings on Strava KOM’s this year count for nothing? Have my mammoth turns on the front at the Wednesday evening social ride gone completely unnoticed? Do Brailsford and co. not realise that I’m approaching forty and time is running out?

My commitment this year to making the Tour team has reached new heights. I’ve got the nutrition sorted (no pastries on Tuesdays and Thursdays), the marginal gains (double lube on my chain, pre-ride), and I can categorically state I have no prior links with performance enhancing drugs. Unless you count the odd dubious friendship in my student years.

(But as we all now recognise, the nineties was a different era.)

And the winner is…

I’m one of those British cycling fans who doesn’t have a massive downer on Team Sky, mainly because I remember how it used to be; you’d be lucky to watch the Tour for three weeks on the telly and even get a glimpse of a British cyclist. But even so, I’d like to see a Frenchman win it. I reckon they’ve suffered enough (31 years of hurt…) and it would be great for the race.

Imagine Bastille Day on Mont Ventoux with Romain Bardet or Thibaut Pinot in the yellow jersey, and half the population of France crammed on to the mountain to celebrate!

Alas, I think that’s a long shot, and one for us romantics.

Apart from anything, with the usual succession of summer strikes in France (air traffic controllers, lorry drivers, farmers, everyone else…) and the resulting travel chaos and petrol shortages, those French cycling fans would have had to set off already to stand any chance of getting onto the slopes of Ventoux by Bastille Day.

In reality it’s hard to look beyond Froome, Quintana, and Contador for the win. And if we’re being brutally honest, backing Contador might be something of a leap of faith. But remember Alberto; I’ve done all the work, made the sacrifices, and my diary is free in July.

You’ve only got to pick up the phone.

I’ll even bring along my limited edition presentation copy of ‘Pet Sounds’ to while away the evenings.

2 comments on “Good vibrations at the Tour de France”