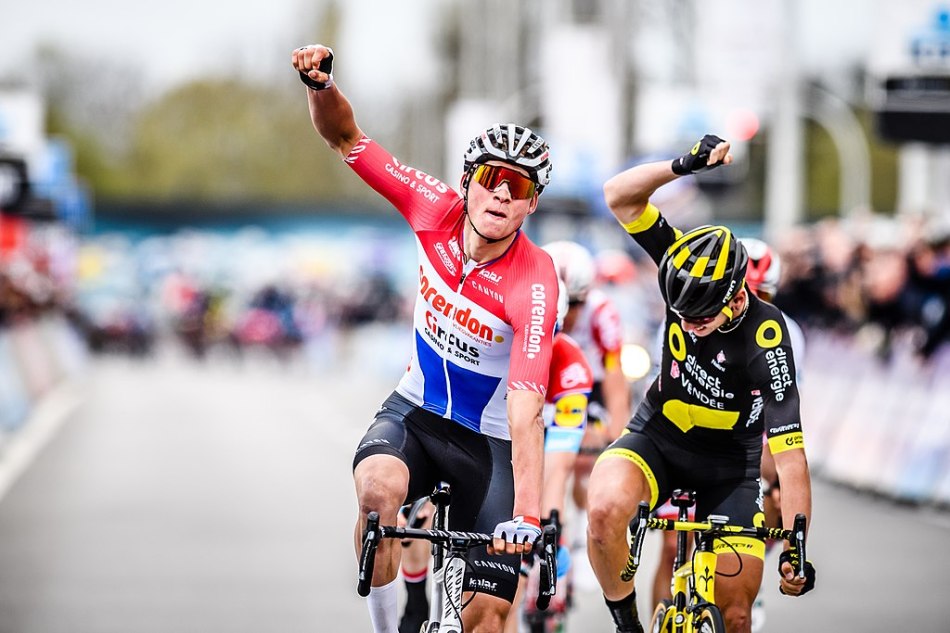 I see your jubilant stage win and accompanying Yellow Jersey, Monsieur Alaphilippe, and I raise it, said Dutch uber-cyclist Mathieu van der Poel. For Stage 2 we had a punchy hilltop finish at Mûr-de-Bretagne which was preceded by a softening up ascent of the same climb.

Thankfully, after the tribulations of Stage 1, this double-whammy was contested by a largely safe, upright, intact peloton. More pile ups today would’ve been hard to bear. Hats off to those patched up pedalling wounded who took the start line today.

For ascent number one of the Mûr, Van der Poel launched an attack. Had this been any other cyclist we’d have laughed at the lunacy of this attempt to ride away from a Tour de France peloton fifteen kilometres from the finish. Being Van der Poel, we dignified it.

But by the time he crested the summit, bonus seconds bagged, he was all but reeled in by the bunch and slinking back down the field. That’s him done for the day we thought, collectively, because to expend such energy and have enough left to beat Alaphilippe second time around was surely fanciful.

After looping around and jockeying for position into the base of the Mûr for part two, a two kilometre drag to the finish, the Ineos Grenadiers did what is swiftly becoming known as an Ineos. They bullied, and dominated, and menaced themselves into a long line of control before melting away inconsequentially.

Richie Porte, hitting the front, gasped, trod water for a bit, and then blew. Geraint Thomas gritted and grimaced. Van der Poel, meanwhile, was away and into act two of his mini-masterpiece.

When he attacked, in that muscular, sparks-flying style of his, potential contenders for the stage win bunched and fought and failed to so much as dent his lead. Alaphilippe, Roglic, Pogacar, Van Aert, immediately fighting for scraps.

Van der Poel, with an effort that mirrored King Julian on Stage 1 for verve and panache, would not be caught. Crossing the line for a stage win and – yep, you guessed it – a Yellow Jersey and overall race lead by a gap coincidentally resembling those bonus seconds snatched on that, ahem, laughable early attack.

Imagine, on top of the insane athletic ability, having the nous to plan and execute that.

Post stage, paraded in front of the media, he dwelt on Grandfather Raymond Poulidor. It was in his memory that the stage win and Yellow Jersey plan had been hatched; Poulidor, stellar cyclist of the 60’s and 70’s, famously never wore Yellow. He died in 2019, well aware of young Mathieu’s prodigious ability.

Van der Poel wept under questioning. A beautiful show of emotion. As if the talent and the nous weren’t enough he appears to also be a fully formed, heartfelt, human, and not the machine he sometimes appears in full flow.

Two stages in – replete with drama, jeopardy, joy and emotion – this Tour already has the makings of a modern classic.