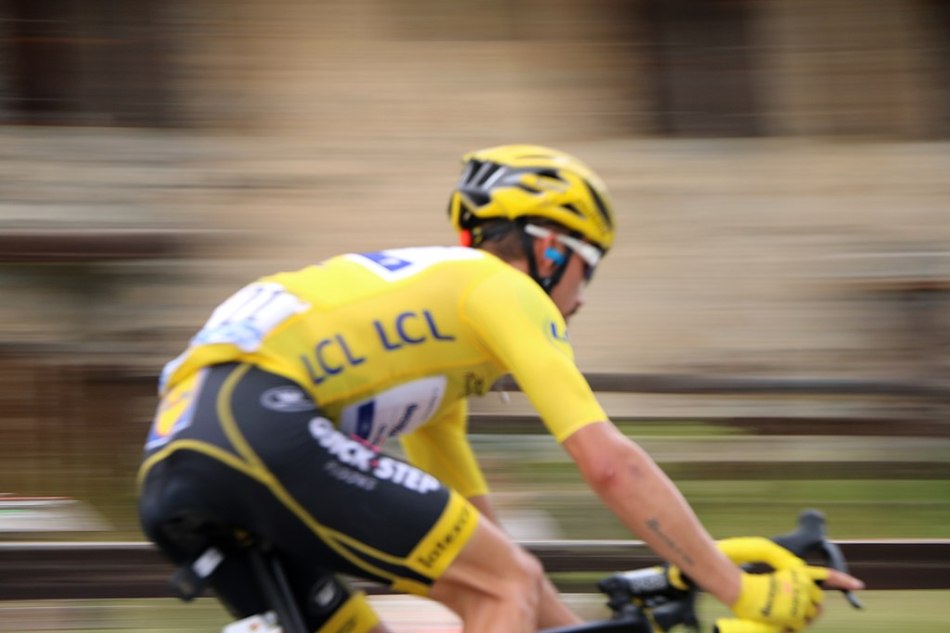 As we edge gently out from the Covid pandemic, we would all agree that fans at the road-side of a Tour de France are a welcome thing indeed. Every last one of them. Ok, except maybe that one who, with forty-odd kilometres of the stage remaining, edged out so far from the Covid pandemic to find themselves in the road.

Martin went down and was swallowed up sickeningly amongst the wheels of the peloton. Several dozen riders followed, a mangled pile of Lycra-clad limbs and carbon fibre appearing before our eyes.

The spectator, no doubt mortified, joining the highlights reel of fan faux-pas at this great race.

Jasha Sütterlin, of Team DSM, abandoned from his injuries, Tony Martin soldiered on, beatern up, and social media judged the guilty fan harshly. The riders reset as pro cyclists do, putting to the back of their mind what to a mere mortal would have been genuine trauma, to resume their race across the Brittany landscape.

Because this is Stage 1 of le Tour, the biggest of big days, and a crisp Yellow Jersey was up for grabs.

Alas, with six kilometres to go, more of the same.

A touch of wheels saw another several dozen riders vaulting into the verge, crumpled beneath one another, only a small, select group escaping clear to contest a punchy finish.

From here, so close to the line, those contenders not lucky (or well positioned) enough to avoid jeopardy would lose time. Whether from accident one, or two, or a combination, the likes of Michael Woods (8 mins 49), Marc Soler (24 mins 38), Richie Porte (2 mins 16), Alejandro Valverde (5 mins 33), and Miguel Angel Lopez (1 min 49) are licking early, day one wounds.

Their Yellow Jersey challenges in tatters.

From here, we needed a spectacular finish. To ensure our abiding memory of Stage 1 of the 2021 Tour de France might be more than a pile of pro cyclists tangled across the Breton tarmac. Twice.

We needed, quite frankly, a Julian Alaphilippe special.

With just over two-thirds of the final, steep three kilometre climb of the Cote de la Fosse aux Loups at the town of Landerneau, our man launched his move.  With Roglic, Pogacar, Van Aert and Van der Poel visibly nudging up against their limits, he eeked out a small gap, and then leapt headlong into it.

Creating fifty metres of clear air off his back wheel he dug in, and grimaced, shook his head, and peered dramatically back down the road in classic, Alaphilippe fashion. In fact he has never looked so Alaphilippe.

A stage win, and King Julian will wear Yellow.

And so it begins. Perhaps, a la 2019, he is primed to lead us a merry dance across this great hexagon of a country. Commanding the race and stoking French passion. A first French Tour winner since 1985, you say?

The answers we craved from Stage 1 have generated further questions. Can Alaphilippe win the Tour? Who, after the day’s carnage, will even take the start line tomorrow? Should Tony Martin, after taking two thirds of a peloton to the head, be among them?

And tomorrow, at the punchy finish of the Mur-de-Bretagne, could Julian Alaphilippe really win again, two from two, and give his rivals the absolute heebie-jeebies?

Job number one: everyone stays upright. But from there, King Julian might be on the verge of something special. Even for him.