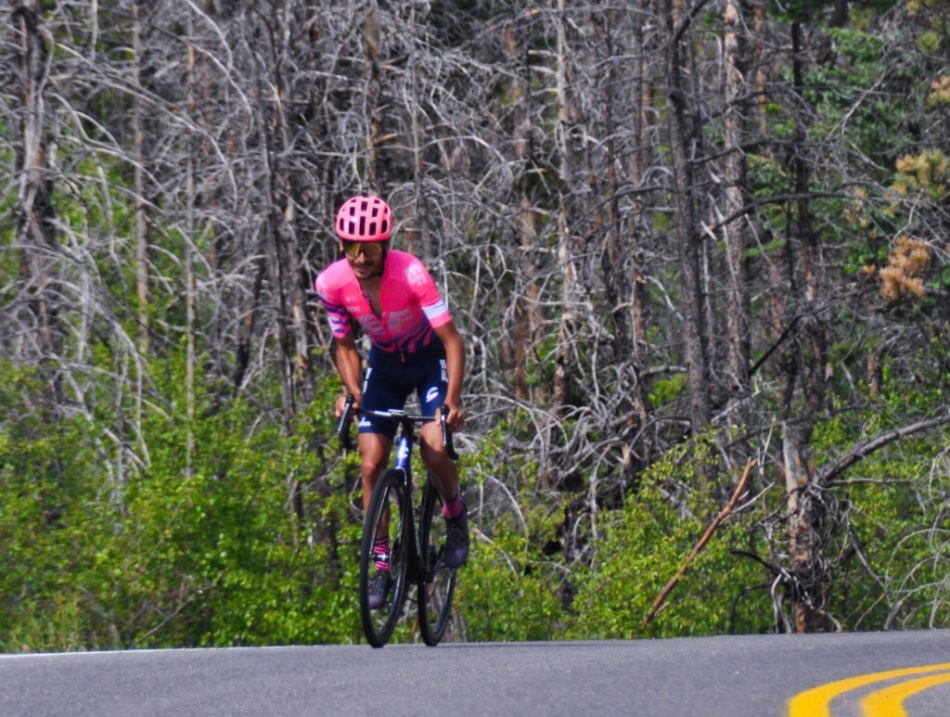 The best stories play out in our imagination.

Back in 1988 American pro cyclist Andy Hampsten attacked, in a snowstorm, on the Passo Gavia. It was a mountainous Stage 14 of that year’s Giro d’Italia and more survival situation than bike race. Caked in snow and ice, fine motor skills a distant memory, he risked life, limb, and a plausible core body temperature for second place on the stage and the overall race lead.

In a career of multiple big-race wins, that ride set up a Giro d’Italia victory and came to define him.

It’s a story that gets better with age; because Andy Hampsten is so flippin’ good at telling it, and because the conditions that day rendered 1980’s broadcast technology largely unable to capture it.

It exists as a set of icy images, a few reels of peripheral TV footage, and Andy Hampsten’s words. Immortalised as a ripping yarn and a celebratory Rapha Jersey. Our imaginations fill in the gaps.

But TV technology (and health and safety protocols) have moved on. In the modern era, almost nothing gets missed.

At time of writing, of course, in the midst of the global Coronavirus pandemic, there is no bike racing to get missed. An inconsequential inconvenience in the context of a global health crisis, but a shame, nonetheless.

Thankfully, there are bike riders out there who take it upon themselves to tickle our imaginations.

By Everesting, for example.

A simple, stripped back form of competition.

The cyclist must clock up the equivalent height gain of a certain Himalayan peak using nothing more than pedal-power. An expensively assembled lightweight bicycle is also helpful. In other words, you ride up and down the same stretch of hill until the elevation bit on your Garmin says 8,848 metres.

And you do it as quickly as you can.

Pre-corona I had taken little notice of this, considering it to be the cycling equivalent of a swingers party; I knew something gritty and energetic was going on, but had no desire to confront the details.

But as the weeks of lockdown rolled on, the cycling media scratched desperately in search of content, and it (Everesting, that is…) became a thing. Statistics as entertainment. And mid-pandemic, this is as good as it’s going to get.

When talented riders, denied their fix of competition, get involved, Everesting escalates. It soon resembles a science experiment. Air temperature, prevailing winds, gradient, air pressure, and topography – the benefits to be gained from a long straight climb (for a fast descent between ‘laps’) – becomes crucial.

Former pro (and professional Strava personality) Phil Gaimon broke the record on May 11th, looking suitably grizzled and pained in the post-record pics.

Four days later he lost it to Keegan Swenson.

Then laid-back uber-Aussie Lachlan Morton broke it, to the mild surprise of his pro-team boss at EF Education First Jonathan Vaughters:

I was sitting down for a nice lunch and glass of rosé on Saturday afternoon when a text message popped up from Lachlan Morton.

“What’d you do without telling us, Lachlan?” was my response.

“Well, I was just going to check it out, but then I just kept going.”

Morton had rocked up to a vaguely suitable hill, with his dad for company, a couple of stripes of gaffa tape across the road to denote a ‘lap’, and got stuck in.

We can only imagine how much he suffered.

TFW you realize you might need to make another Everesting attempt.

Lachy verified his segment with the officials of the prior to his ride, but it appears it was based on faulty data. He still got a great day out on his bike, and when you're Lachlan, that's more than enough 🙌 🚲 pic.twitter.com/y3BpNvcTQ8

But, before the dust had settled, he had his ‘record’ DQ’d for some kind of nerdy data anomaly. And so, before my eyes, and in lieu of anything resembling an actual bike race, I’d stumbled across a workable slow-motion narrative.

Slower than the slowest of slow Tour de France transition stages, but with the crucial addition that it was happening way off in our peripheral vision; each new attempt an analogue pop-up bike event revealed digitally in post-production.

The less you actually see, the more exciting it is.

At time of writing Phil Gaimon is up at altitude to train for some new as-yet unannounced attempt. Other, wafer-thin mountain men are undoubtedly out there planning, a roll of gaffa tape in their hand and the scent of ‘glory’ in their tiny nostrils?

We can only hope that capitalism doesn’t decide that this interest in turning a mountain into a verb is a sign that we want it sponsoring, packaging, and televising, when in fact we don’t. The mystique would be swallowed whole. The spectacle of a skinny cyclist riding endlessly up the same hill transformed from epic act of heroism into data admin.

We’d soon lose interest and go back to wondering just how much pain Hampsten endured that day on the Gavia.

He’s inspired us to ride farther and to have more fun doing it, from the Kokopelli Trail to his two Everesting rides. After faulty elevation data undid his first attempt, he went back a week later and did it again. Congrats on the new record, Lachy! 👏🙌 pic.twitter.com/WPCMjN7tgS

On 21st June news filtered through; an Everesting update. Lachlan Morton had snuck away while we slept and casually (re)broke the record, adding in an extra lap this time to be double sure.

Of course he had.

A Strava screenshot, a couple of pics, maybe a brief eyewitness account, and the truth of it left to the Everest of our imagination. Gritty and energetic. The best place for it.

7 comments on “The Everest of our imagination”