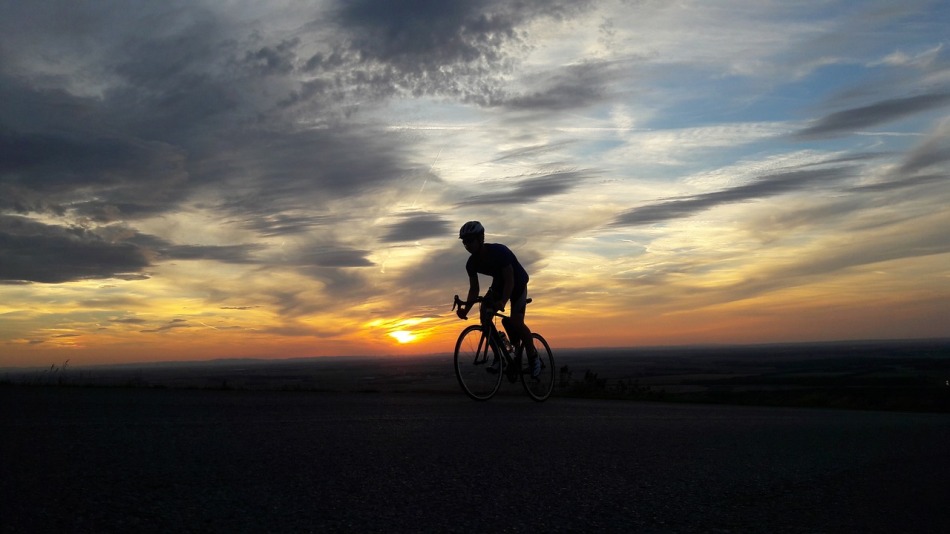 It’s true that I was a bit light-headed – I was deep into one of those rides. You know the type. It’s May, and if you get out and truly break yourself now, early season, you’ll reap the rewards for the rest of the year.

So I was clocking up miles, hunting hills, and in a state of mild (yet strangely welcome) physical distress.

Hoiking my aching body up yet one more hillside I peered over a shoulder to spot a fellow cyclist, thirty metres back and gaining. Ah well, I thought, he’ll catch me and pass me and I’ll just have to take it on the chin.

This is not the moment to put up a fight.

Couldn’t if I’d wanted to.

Thirty seconds later his shadow appeared in my peripheral vision. I prepared to greet him with, ahem… grace and class. Ten more pedal strokes, the shadow still there. I peered back, his face was obscured by the dazzle of sun behind.

Still nothing. I got cross. Low blood sugar, tired legs, and a rude person will do that.

Had I been in any fit state I’d have tried to attack up the road and drop him – made use of the adrenalin spike and delivered a devastating blow in response to his basic lack of decency – but I wasn’t, so I didn‘t.

I just sat there, pedalling squares and gently seething.

Right, I thought, mate, you cannot just sit there, a shadow on my wheel, without acknowledgement. Especially when I feel like shit!

I took one hand from my bars to look back dramatically, like a fiery southern European pro about to gesticulate his flamboyant disdain (a bit like Movistar’s Marc Soler at the 2019 Vuelta Espana):

Only to find nothing.

An empty road, shadows cast long by a low-slung sun, a cow in a field.

Explanations were thin on the ground: a figment of my road-weary imagination? A hidden turning that I missed and he took? A ghost?!

Could this have been the apparition of some long-dead wheel-sucking legend of the Lancashire cycling scene? I’m not one for the supernatural, but I reserve judgement on wheel-suckers. If anyone’s behaviour might tear a hole in the curtain of reality and lead them across to a purgatorial netherworld it is surely theirs?

Maybe this was my ‘scrooge’ moment?

A visceral warning of what might lie ahead should I embrace the dark side and decide that ‘pulling a turn’ is for others and not for me.

I scoffed a handful of jelly babies and took a good swig of water, rejuvenating my grip on reality. Low blood sugar can play havoc with the imagination. As can wheel-suckers, for that matter.

2 comments on “The ghost of wheel-suckers past”