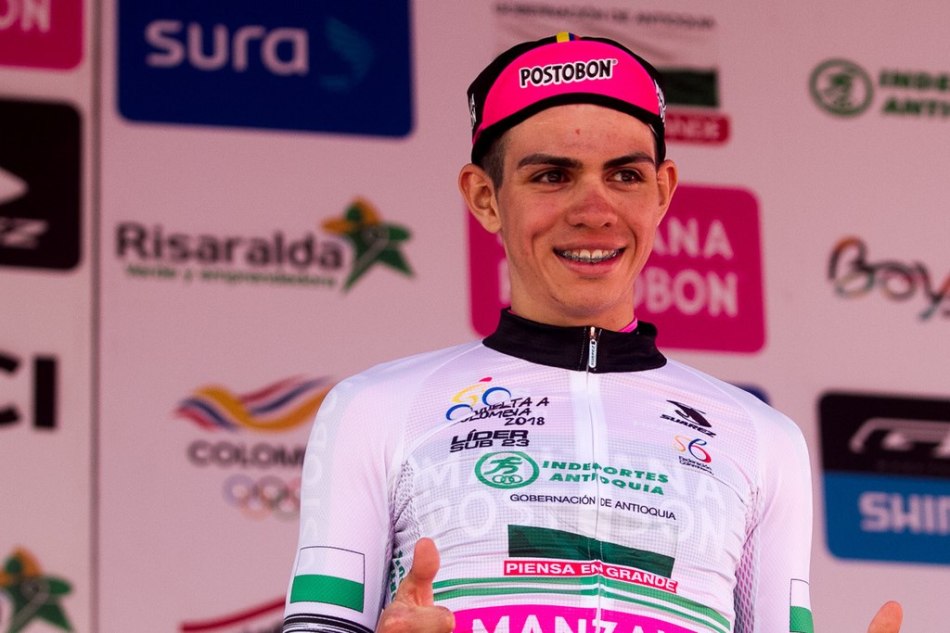 At what point, in 2019, do we decide that this new trend for youngsters winning massive bike races is not a trend at all, but par for the course? The new normal. Morphing the sport from one where anyone under twenty-six is basically at kindergarten into officially, literally, a young man’s game.

Today, a mountainous Stage 18 with a toothy profile, it was the turn of Sergio Higuita. The next next best thing to come out of Colombia and the most recent ‘best one yet’ following the last best one yet.

Higuita took a punt from the break and, on the final climb, descent, and time-trial to the finish in Beceril de la Sierra held off Valverde, Roglic, Lopez and Majka.

He whipped off his helmet and shades for the post-stage interview and revealed himself, as expected, to be in possession of the delicate features and glowing skin tone of a small boy.

While Higuita was busily kicking of his palmares and boosting his Instagram following we were treated to a GC battle in the background. Deep into a Grand Tour as we are much if the day’s break, unlike on previous days, faded, melted, and slipped out of contention. Behind our new favourite Colombian only the very strongest were still prevailing.

The aforementioned group of four worked largely in tandem to take positions two to five. Quintana, and twenty-year-old sensation Pogacar, were dropped on the final climb up to Puerto de Cotos. The plateau and descent which followed offering them no chance to latch back on.

A minute was lost.

Miguel Angel Lopez did his best to relaunch his bid to unseat Primoz Roglic, but to no avail. ‘Superman’ definitely, now, has a ‘thing’. He attacks on a climb with Pantani-esque explosivity, looks for all the world like he’s in control and about to cause utter devastation amongst his rivals, only to be brought back with a whimper three kilometres on.

Rivals, with cool heads, have got the measure of him.

And for James Knox, everyone’s favourite Cumbrian, his time gains from Stage 17 cashed their cheque today. He’s still in credit, and commanding a solid interest rate, but needs to budget carefully from here. Losing four minutes and some, he remains ninth on GC.

We now have a likely sprint into Toledo, a mountainous mission to Plataforma de Gredos, and a ceremonial circuit of Madrid.

As it stands Primoz Roglic is, if not unassailable, then certainly no assailable.

Somewhere in between, perhaps?