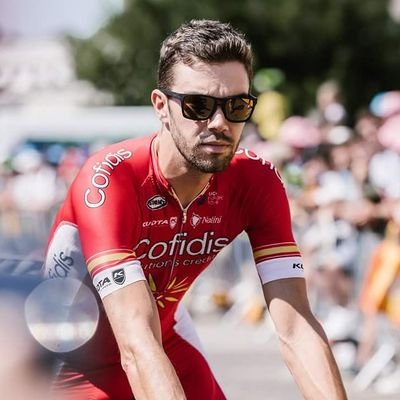 Yesterday, on Stage 5, Jose Herrada had his shorts pulled down and his bum smacked by relentless Spaniard Angel Madrazo; the Burgos BH man pinching the stage win from his compatriot.

Today, thanks to Jesus, Herrada’s Cofidis team got their win.

Not a miracle on a par with leper healing or small-scale wine production, perhaps, but a tough, hard earned breakaway win on a typical lumpy* Vuelta stage.

You’re surprised to hear of my hitherto undeclared religious streak?

No, not that Jesus. I’m talking about ‘Herrada’ not ‘of Nazareth’. Jesus is Jose’s younger brother and teammate. He and the cast of a stellar breakaway – Gesink, Teuns, Van Garderen, De La Cruz, among them – battered their way across the landscape today towards the final climb to Ares del Maestrat.

They were not quite met by the brutish slopes we saw yesterday but a challenging climb nonetheless.

It became one of those virtual red jersey to-and-fro kind of days. The peloton, including race leader Lopez, minutes back down the road, leaving David de la Cruz and Dylan Teuns as the potential wearers.

As Belgian Teuns broke de la Cruz in the final kilometres Herrada hitched a ride off the back of his enthusiastic mission to snag the lead of a Grand Tour, before leapfrogging him for the stage win. Teuns did, indeed, take the red jersey. Win-win.

That Herrada, Jesus, then dedicated the win to his brother, Jose, was a nice touch.

And Dylan Teuns is building a rather impressive run of results for himself. He won Stage 6 at le Tour – the summit finish to La Planche des Belles Filles – and now leads La Vuelta; unusual territory for a Flandrian, their very reason for existence usually revolving around the cobbles, cowshit, and sideways rain of northern Europe in spring,

Can’t say I blame him.

Were I a freakishly talented bike rider I, too, would be heading in the general direction of the sunshine and staking my claim to a piece of it.

But, in amongst all this loveliness, came the visceral brutality of bike racing.

A serious crash halfway through the stage saw Rigoberto Uran and Hugh Carthy, along with former race leader Nico Roche and Victor de la Parte, forced to abandon. For EF Education First, the team of Uran and Carthy, the day was compounded by van Garderen exit stage left on a fast descent late in the stage for a rendezvous with a prickly looking bush.

He remounted, and plodded on, to finish the stage dead last.

Were Jesus – ‘of Nazareth’, not ‘Herrada’ – actually interested in bike racing (rather than acting as a simple plot device to liven up a Grand Tour stage report), he could’ve revealed himself to we Eurosport subscribers, laid hands on the likes of Uran and Carthy, set their bones, and lead them gently to the start line for Stage 7 tomorrow.

Alas the race rolls on, without Uran, Carthy, or the son of God.

*For the benefit of any amateur cyclists not familiar with the concept of a ‘lumpy’ Vuelta stage: probably on a par with the most difficult days you’ve ever had on a bike. Y’know…just lumpy!