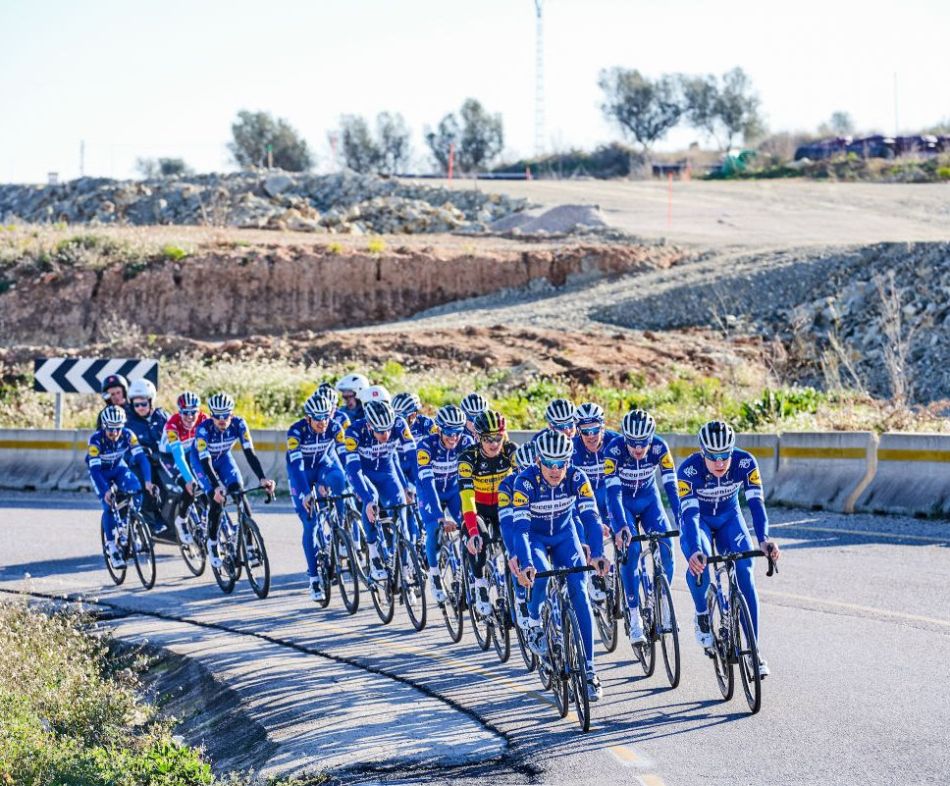 The first two thirds of stage four were slow, quiet, and featureless. The lull gave me a chance to consider the fortunes of Team Ineos in this Vuelta to date.

They’d probably rather I didn’t.

In the absence of most of their star performers they’ve turned up with a team of whipper-snappers and cast members deserving of some time in the spotlight. Duel leadership in the form of Tao Geoghegan-Hart and Wout Poels.

Poels being the bean-pole climber often cast as super-domestique in support of Thomas, Bernal or Froome. Geoghegan-Hart the perky, chatty, amenable Londoner, winner of a couple of stages at the Tour of the Alps earlier this year.

On stage one, the team time trial, they managed a mid-table eleventh place.

On stage two, a classic hilly schlepp through the parched Spanish landscape, Poels and G-H managed to tumble ten minutes behind the main contenders. The General Classification, after two hundred and thirteen of the three thousand two hundred and ninety kilometres, gone.

As the peloton trundled in the direction of El Puig today the Eurosport coverage cut to a stage start interview with Teo Geoghegan-Hart. The usually chipper Brit could barely make eye contact with the camera.

He gave it the one-day-at-a-time disappointed-obviously the-team-is-still-very-focussed spiel but the body language told a different story. This was his big chance.

He now takes on the mantle of stage hunter. Partner in crime Wout Poels in exactly the same boat, paddles chucked over the side, drifting in the current, and wondering how they ended up in the sea in the first place.

As for the stage, a cat. three climb forty-odd kilometres from the finish negotiated, the pace ramped up for a near certain sprint. All eyes on Sam Bennett. Can anyone beat him?

In the final ten kilometres Deceuninck Quick Step, on behalf of their man Fabio Jakobsen, went on the offensive. Dictating terms. If we die, we die with our boots on, was the message. Seems like the kind of manly, gung-ho battle cry that Quickstep might adopt.

They are, as we know, Alphas in a world of Alpha.

Remy Cavagna attacked solo, not expecting to win, but to soften others up. Force other teams, Bennett’s Bora included, to chase him down and expend energy. Deceunicnk, with their man up the road, could now sit in for the ride.

In the final kilometre, job done, Cavagna was swept up. Jakobsen sat glued to the wheel of lead-out man extraordinaire Max Richeze. But where’s Bennett?

Sprinters flocked and swarmed. Richeze and Jakobsen composed down the right-hand side while others darted and dived. Bennett’s out of position, he’s nowhere!

Richeze peeled off, Jakobsen dived in search of the line, there’s Bennett, threading the needle, from miles back..!

Neck and neck. Wheel to wheel. A bike-throw apiece and…

Jakobsen, by the width of a, well…the width of a subatomic particle. Maybe two. Let’s just call it a close finish.

Jakobsen, and Deceunicnk Quick Step, howling like the on-message brand aware Wolfpack they are.