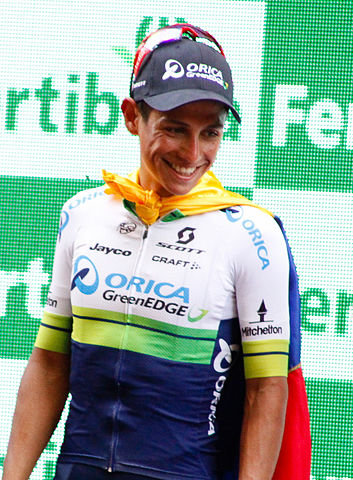 There are, and always have been, cyclists who command respect. They are admired, sometimes begrudgingly, for a relentless excellence that has no time for fallibility.

And then there are the cyclists who are loved.

To be loved requires something more than near perfection. It needs a quirk of character, a flaw, or a weakness. A flakiness in the heat of battle. A ‘Shut up legs’ a la Jens Voigt, a flair like Taylor Phinney, or a lone-wolf showmanship like Thomas De Gendt.

In the case of Esteban Chaves, the universally-loved Colombian, it’s all about the smile.

Off the bike he resembles a small boy. Naïve and trusting, ready to accept the theft of his lunch money or the eighth wedgie of the day with a grin, a shrug, and a what-can-you-do-it’s-not-all-bad-at-least-I-still-have-my-health?

Except that last year, after winning a mammoth Giro stage up mount Etna he then, for several months, didn’t.

The smile remained, but something was missing. There was no glint. The boyish body language had gone. He aged before us. After struggling on, schlepping around, far from the business end of every race he entered, for weeks, and months, there came a diagnosis.

Epstein-Barr. Aka Mono. Aka Glandular Fever.

Whatever your continent, he was a poorly boy.

Will he ever be the same again? we wondered.

This week, in the mountains of the Giro, we saw signs. First he was working hard for the team, setting a pace on the climbs and visible. Then he was infiltrating breakaways.

On the final climb to San Martino di Castrozza the break had been given a thorough whittling and was down to the four or five most likely. Chaves, the favourite, was imperious. He attacked, and attacked again. Then he attacked. He followed this up by attacking, before a devastating attack in the final kilometres saw him clear.

To see a bike rider deal with a breakaway mountain finish like that was a sight to behold.

A thing to admire.

To then witness the smiles, the tears, and the decision to follow up the winning of a bike race with an attempt to break the high-altitude speed-cuddling world record, sealed the deal.

This is what Chaves can do.

It’s why we love him.