Davide Cassani, as you may know, is the manager of the Italian national cycling team. He’s been in Yorkshire recently recce’ing the route of the forthcoming World Championships in September.

Wildness of terrain and steepness of climbs duly noted he headed back to his home region of Emilia Romagna in Italy (he hails from the town of Faenza, thirty miles south-east of Bologna) where I, as part of my recent cycling trip to the area, caught up with him.

We shared a bike ride, before some post-ride refreshment in the sun kissed square of Santarcangelo di Romagna.

Coming, as I do, from just across the Yorkshire border, I felt duty bound to offer some advice (take a rain jacket) and discuss the potential effects of the English food on the refined stomach of a world class Italian cyclist (avoid the full English on race-day).

Cassani, of course, has no need of my advice. This is a man who is steeped in bike racing. Throughout a successful pro career in the 80’s and 90’s he rode as an occasional race winner (two stages of the Giro d’Italia, three time Giro dell’Emilia) and consistent domestique for the likes of Claudio Chiapucci and Stephen Roche.

And on the day we met, well over twenty years after retirement, he showed himself to be, still, several leagues more competent than me on the bike. The fluid pedalling style and ability to push a big gear on a climb flagging me up as the rank amateur I am.

He also, while in Yorkshire, witnessed the full English first-hand, and is rightly wary. 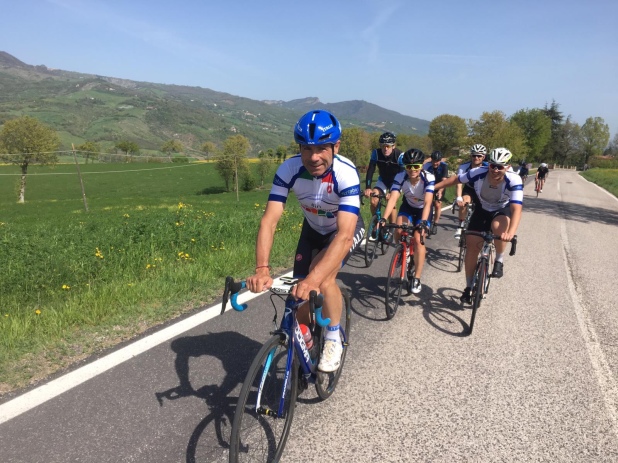 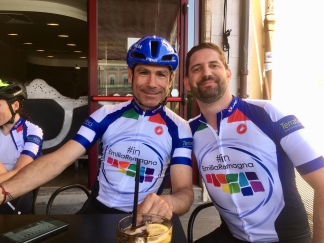 In the safety of the café, having negotiated eighty kilometres or so, we talked about his pride in Emilia Romagna, the development of cycling in the region, and the forthcoming visit of the 2019 Giro d’Italia for ‘The Big Start’.

“The Giro d’Italia is not only a race,” said Cassani, “it offers very important exposure, not only for that week but for the future, and all over the world.” As an ambassador for the region as President of the regional tourist promotion agency, he is passionate about Emilia Romagna as a sporting destination, a “new kind of tourism, involving sport,” as he put it.

In the UK, I suggested, we cyclists know Tuscany, the Alps and Dolomites, but not, generally, Emilia Romagna.

“We are famous because of the beaches and the ocean,” he conceded, the Rimini coast being perhaps the most well-known example, “and historic places like Ravenna, Modena and Bologna to visit. We also have many hills; it’s the perfect landscape in which to ride the bike.”

Plenty agree. In Italy it is the second most visited region for cyclo-tourism (behind Trentino). 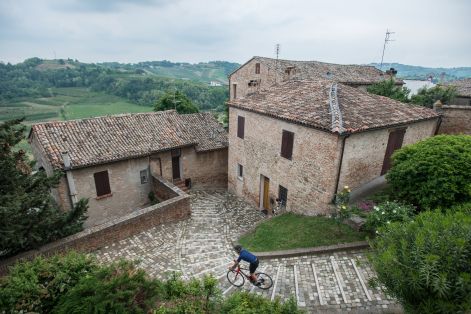 During my visit I was struck by the cyclists out on the road; plenty of tourists, of course, but also groups of local cyclists, riding their local roads, like cyclists do, and delighted to welcome the likes of me; soaking in the spirit of what it is to be a cyclist here.

They wear team colours and revere local riders, Cassani himself and the iconic Pantani, for example. They laugh and chatter on the flat, and go quiet, in silent effort, on the climbs. The shout of ‘aqua’ goes up at the sight of a drinkable water fountain. The café involves espresso or Coca-Cola, sometimes beer and local cheese.

This is a living, breathing cycling culture.

The foundations exist, formed over generations, and they’d love you to visit, but if you don’t the cycling will still happen without you.

If you are in any way romantic about your cycling it’s a great place to ride. With the variety offered by the Apennine Mountains – from testing loops in the foothills to the big, challenging climbs – you could spend a fortnight and never ride the same roads twice.

For ‘The Big Start’ and stage one of this year’s Giro d’Italia the city of Bologna grasped their window to the world with both hands. The time-trial course rattled through the city streets before taking a hairpin to head right up the portico’ed climb of San Luca.

It was an event of total, telegenic beauty. The cacophonous guard of honour provided by the fans suitably spine-tingling. All the energy and theatre of a bike race in Italy.

“We don’t only have the Giro but many other events,” continued Cassani, . “Nove Colli, for example, the biggest race in Europe with twelve-thousand riders. Next year is the fiftieth edition.”

There is a vibrant scene of Gran Fondos here in Emelia Romagna. I myself rode Dieci Colli while in the region and discovered, as I tried (and failed) to hold the wheels at the head of the field, they take their bike racing pretty seriously.

As so often with cyclists, talk wound its way back to food again. Mainly because I was getting hungry. Cassani himself is tanned and lean, clearly a man who watches his calorie intake carefully.

“What shall I eat tonight, before my ride tomorrow,” I asked, clumsily seeking a pearl of nutritional wisdom, “Tagliatelle, perhaps?”

And then he took out his phone, found his pictures from Yorkshire, and scrolled to a shot from the breakfast table at his Richmond hotel. Cassani, knife and fork at the ready, and a plate of full-English before him.

As I said; he has no need of my advice.