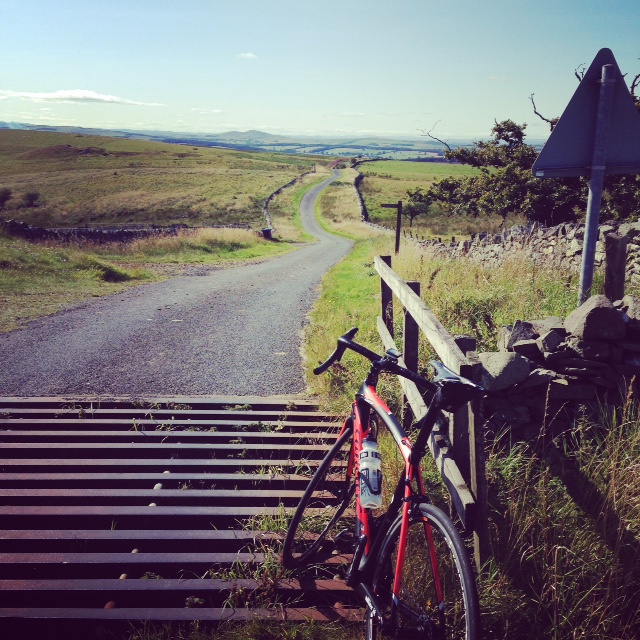 I’m not against people. I mingle with them regularly with barely any ill effects. Some of my best friends, in fact, are people. I’m pro-people. I’m a fan.

Having said that, I like my own company and always have. I can while away many an hour doing very little other than passing the time. I’m a man of simple pleasures. A book, maybe a nice sandwich, and I’m happy.

I haven’t been lonely since 2002 (I was living alone and reading too much about the Bush administration and the Iraq war…a tricky combo).

These days, my idea of heaven is a solo bike ride through empty countryside punctuated by the occasional farm animal and dotted, every thirty miles or so, with a coffee shop capable of producing a passably artisan flat white and a slab of rustic flap-jack.

I like riding with other people, as long as I’m getting my recommended weekly dose of riding solo.

So it was that I headed north recently, alone, for a seventy-mile circuit taking in corners of Lancashire, Yorkshire, and Cumbria. Pedalling north-easterly up the climb of Barbondale – silent and uncompetitive, the wind at my back, and “Midnight Rider” by the Allman Brothers on a mental loop in my head – I was content.

A fellow rider passed in the opposite direction. A nodded hello. Followed by another. Then a group of five more. There were Team Sky jerseys in abundance. Numbers pinned to handlebars. Another gaggle passed by, underdressed in shorts and short sleeves. Each one nodding a hi, hello, alright mate, hiya, grunt, scowl, smile, wave.

All of two-wheeled humanity.

A friendly lot, riding a sportive, the route of which appeared to be the reverse of mine. As is their right, of course. To each their own.

But playing havoc with my solitude.

I traversed along the valley to Sedbergh, the town of books, with its cobbles and its five-hundred year old boarding school, where I would’ve stopped to drink coffee and contemplate the passing of time. Would’ve. My plans dashed by the fussy infrastructure of an amateur event.

I pedalled on. Following the “cycle route ↓” signs in reverse and obliged to greet each rosy-cheeked rider on their communal day out.

Did they feel sorry for me?

Maybe they assumed I was lost?

Or wondered if I was lonely?

I should be so lucky.

5 comments on “Pro-solitude, not anti-people”