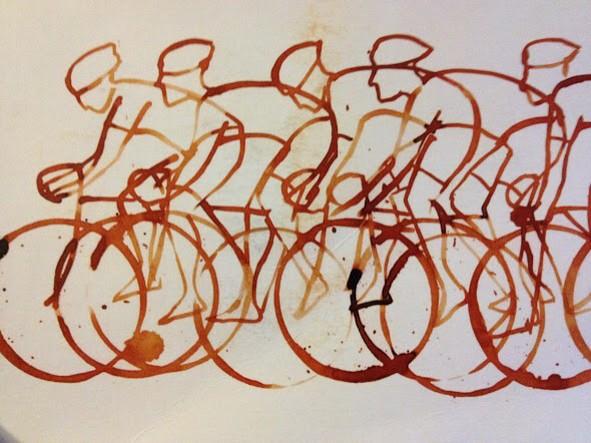 It’s a standard, bright, blustery October day in northern England. The glory of autumnal colour is strewn across the lanes as a slimy slick of mulch, ready to whip the front wheel of a cyclist out from under them.

I’m happy, because I’m cold, but I know the café is only three miles away. Then a thought pops unannounced into my head.

It contains the p-word.

“Hope I don’t get a puncture” I think, immediately unnerved by the thought, and the fact that I’ve just had it. Why’ve I just thought that? I haven’t had a puncture for eighteen months – it hasn’t even crossed mind. Until now.

Either…all of my human senses, unbeknownst to me, had been absorbing data and detail about road conditions, tyre wear, local hedge cutting routines (and resultant spiky stuff on the roads), and the laws of averages, and the combined weight of all this circumstance had concluded the probability of a puncture was unusually high today, or…

The puncture fairy has decided I’m due.

Either way, I’m in no doubt that I’m going to get a puncture. This is how it works. If the very essence of your being tells you it’s coming, then it’s coming.

For now, I reach the café without mishap, and tuck into a fancy coffee and a massive slab of cake, happily bumping into an old cycling friend of mine warming his damp body against the log burner. We have a chat, before he and his companion finish first and head off while I zip up moist clothing and pull on sweaty gloves.

I wander across to my propped bike.

Make to wheel it across the café car park.

I scratch my metaphorical head while a fast edit montage memory sequence runs through the movie of my mind. Park up…order coffee…sit with old cycling buddy…talk rubbish for twenty minutes…wave him on his way…pull wet kit on…

OMG! as the youngsters would say.

He’s let me tyres down on his way out!

As I was wrestling with the neoprene of my ineffective autumn gloves, he’s let me flippin’ tyres down. It’s not logic and science, and nor is it the puncture fairy. It’s secret option number three: sabotage!

What other explanation can there be?

I’m aware that paranoia is not an attractive character trait.

Punctures, and the threat of them, have long been known to induce it. When paranoia strikes it’s often helpful to get together with people you trust (some fellow cyclists) in a place you feel safe (a favourite mid-ride café) and embrace the safety and security offered therein.

So where does this leave me?

Needless to say I’ve unfollowed him on Strava while I consider my options.

View all posts by road_THEORY