As a rule, it’s not difficult to convince a cyclist to part with hard cash in exchange for ‘nutrition.’ We’re suckers for anything that promises to make us ride faster. But I don’t think we’re under any illusions about Coca-Cola.

On the ladder of nutrition it sits just below Haribo, and just a rung or two above a McDonald’s breakfast.

Healthy is not a word that springs to mind.

And I don’t think cyclists are drinking it for political reasons.

Hopefully plenty of cyclists choose not to drink it because of Coca-Cola’s heavy-handed anti-union approach and their penchant for draining community water supplies in impoverished countries heavily populated by brown people, but I don’t think it’s being quaffed in support of these policies.

So we can rule out both nutrition and morals.

Could it be simply the caffeine, and sugar, and its ability to quench a thirst?

After all, when you’re hot, and tired – your body is so calorie deficient that it’s autonomously sucking carbohydrates from the passing foliage – a Coke does rather hit the spot.

Some might argue it would hit the spot even sooner were it still manufactured to the…ahem, ‘original’ recipe. Although it’s entirely possible the ‘infused with cocaine’ story is an urban myth.

Not being an expert in this area I would suggest that a can of Coke, post stage, would be preferable to a line of coke. Surely the last thing your parched, moisture deficient body needs is some powder?

Maybe a compromise would be best?

One of each – both can and line – as the optimum solution?

Though I can’t stress enough that I’m not an expert in this area. 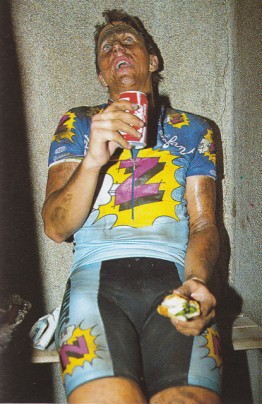 In answer to the question that we all came here for: pro-cyclists drink Coke almost entirely to look like an 80’s pro.

Had Google Images been around thirty years ago the cycling bit would’ve been chock full of the likes of Fignon, Hinault, Delgado, Kelly and Moser looking casual, in iconic kit, on aluminium bikes, supping cans of Coke.

Or, in the case of Greg LeMond, as an accessory to a post Paris-Roubaix thousand-yard-stare.

The cans would be basic and clunky, made from steel and resplendent with ring-pulls ready to lacerate any wildlife in the surrounding area. If said can was swiped casually from a star-struck roadside fan mid-stage then all the better.

In the 80’s, for a cyclist, a can of Coke was de rigeur. It was the Garmin of that decade. All the cash that cyclists now spend on toe-covers, gadgets, and waterproof phone cases used to go on Coke.

Although, of course, if we had Google Images then we had the internet, which means we probably had Garmins, which left us without the financial wherewithal to buy Coke.

And I’m not sure how any of this explains toe-covers.

You’ll have to take my word for it: cyclists in the 80’s loved a can of Coke.

But while a lot of morally dubious behaviour has been pinned on cyclists over the years – almost all of it relating to the stuff they put in their bodies – I’m not sure Sean Kelly and his mates quite drank enough to be held responsible for Coca-Cola’s unethical business practices.

The corporate men in suits carry the can for that.

8 comments on “Why do cyclists drink Coca-Cola?”