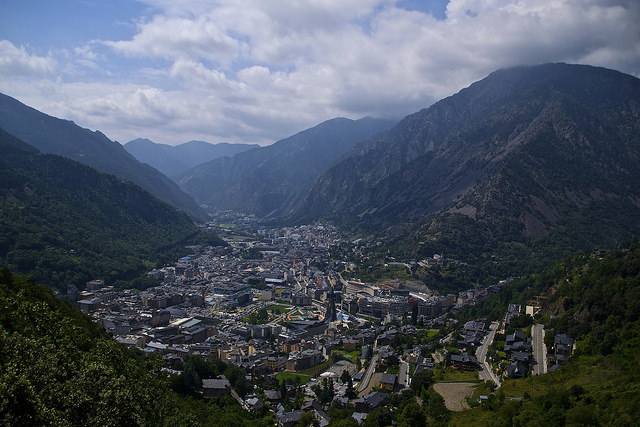 Today, at La Vuelta, Simon Yates was on home turf. On the small handful of days each year when he’s not trotting the globe being a top pro cyclist he calls Andorra home.

The stunning beauty of this mountain kingdom is offset by the brutal infrastructure of a tax haven. Nestled in the valley are wide highways, modern comforts, and shrines to the Gods of capitalism.

If you want shopping, Andorra might just be the place for you.

For the cyclist there are climbs a plenty to ride up but not much in the way of adventure, wilderness or solitude. It’s not a place to shoot a Rapha campaign, is what I’m saying.

It seems to hit the spot for Yates though.

Todays stage of six mountains in under a hundred kilometres was designed to deliver fireworks. To be raced hard, in a flurry of attacks, and produce an edge-of-the-seat set piece red jersey showdown.

Problem is, the cyclists are tired.

We sit, in front of our TV, a range of snacks and fancies in reach. We wonder whether we might walk to the pub later, whilst considering how much the local cab firm charges for half a mile, and we shout at the screen.

“Attack! Attaaaaaack! What the hell is Quintana doing? Valverde needs to attack…this is his only chance…etc.etc.”

As if it hadn’t occurred to Quintana or Valverde that to attack Yates, gain time, and relieve him of the red jersey, wouldn’t be absolutely ideal. The perfect tactic. Certainly preferable to hanging on grimly, mountain after mountain, using every watt of willpower not to crack.

And on that final climb, with a handful of kilometres to go, Valverde did indeed crack.

The TV cameras caught the moment.

Something inside the veteran Spaniard snapped and we saw, immediately, that he’d been clinging to a precipice. In an instant his pace had halved, and the race rode alarmingly up the road and away from him.

It was a forlorn sight.

Quintana, team mate and co-leader, dropped back so they could both look forlorn. The Colombian slowed, and slowed again, before slowing enough for Valverde to sit on his wheel.

The pair of them tumbling down the rankings.

Meanwhile Enric Mas and Miguel Angel Lopez were up front duking it out for the stage, while Simon Yates sat fifty metres behind them, calm, and in control. He’d reigned in his aggressive instincts in favour of a percentage game.

Never looking anything other than in complete control (at home, you might say), he crossed the line third to become Vuelta winner (in waiting…) and his head and shoulders slumped.

In happy relief, I presume.

Cable taught muscles, both mental and physical, were given a moment of release.

Tomorrow, in Madrid, he wins the race.

The stage winner was one Enric Mas – protégé of old snake hips himself Alberto Contador and the next big thing in Spanish cycling. Picking his moment, as Valverde slid backwards, to claim that crown.

It is rumoured that now Yates has achieved his goal he will relocate back to his home town of Bury, in Lancashire, to be closer to the famous Bury market and it’s infamous black pudding.

Rumours started by me, admittedly; I find the idea of the man with the most multi-continental accent in pro sport living in a market town in the north of England unreasonably amusing.

The tax rate might not be up to his usual standards but I’m sure he’d get some good, down to earth appreciation for his efforts: