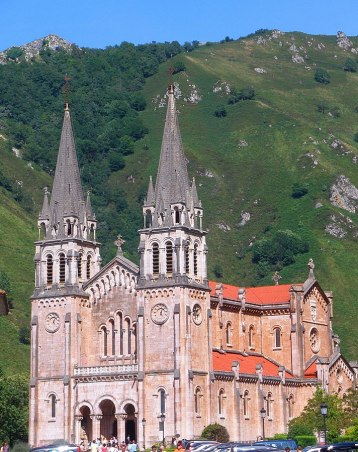 For kilometre after kilometre of today’s stage the baby-blue of the Astana team drove the pace on the front of the peloton.

Miguel Angel Lopez was feeling perky. They were clearly setting him up for an attack on the Lagos de Covadonga, the set piece finishing climb of the day.

The Covadonga resembles a great staircase. It ascends in bursts of stiff gradient between sections which ease, or are flat, or occasionally very slightly downhill.

When people talk of the Covadonga – those who’ve ridden it, or know someone who’s ridden it, or are just intrigued by it’s mildly amusing name – they do so in hushed tones.

In La Vuelta, it is a legend.

There’s a church at the bottom of the climb: the Basílica de Santa María la Real de Covadonga.

As the riders skirted past it I felt sure that Carlton Kirby, Eurosport commentator extraordinaire, would make reference to it. That the riders might be wise to offer a prayer before the climb. That divine intervention might be handy.

Instead, he fixated on the two massive bell-towers.

And then we reached peak-Kirby.

He uttered the following: “two great bell-towers there – the dingers on the donga you might say.”

The metaphorical tumbleweed rolled through the house of every Eurosport viewer. Sean Kelly was silent. Kirby immediately apologised, realising that:

c)   He’d now made it impossible for any of us to refer to the ‘ding-dong battle’ that was about to ensue – he’d shot our collective bolt too soon.

With seven kilometres of painful climbing to go Lopez did indeed attack.

To say his attack had been telegraphed would be a woefully outdated analogy. His competitors had been invited to join a Whatsapp group, accepted politely, and then immediately been sent that bike emoji with the puff of wind emoji behind it to make it look fast.

Shortly afterwards Thibaut Pinot attacked. This one had the element of surprise. Before you could say “social media blackout” Pinot was around the bend in the mountain mist and away.

It looked like, and was, the stage winning move.

Thereafter, with Lopez and Pinot up the road, the rest of the contenders knocked lumps out of each other.

Almost literally, at one point, as race leader Simon Yates, feeling he was doing all the hard work, waved his arms around angrily in the general direction of Valverde, Quintana, Kruijswijk and Mas.

Building a little reputation as a grumpy bugger, if I may say so. In the end he calmy took third place, behind Pinot and Lopez, to extend his race lead ever so slightly.

Whichever way you look at it the race dinged on the -donga.

Which, lets be honest, makes no sense whatsoever?!