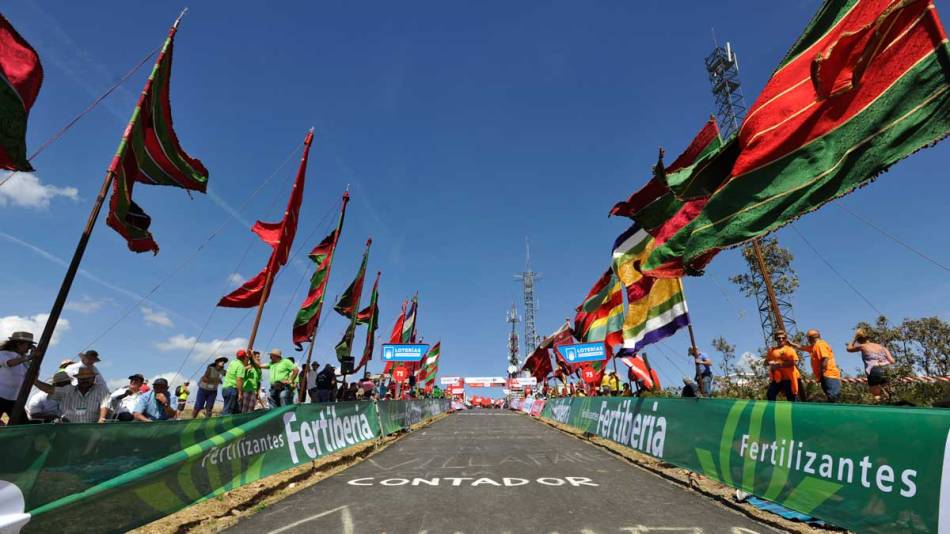 This morning, pre-stage, if you’d checked our respective Wikipedia pages you’d have noted that myself and Oscar Rodriguez, of the Euskadi Murias team, shared the same number of wins as a professional cyclist.

Not one, between us.

Today, on the vicious climb of La Camperona, the young Spaniard leapt ahead of me.

I just hope he’s got a good lawyer, because he did this by employing Chris Froome’s patented spinny-spinny thing. I understand the waggly-elbowed one can get quite litigious when people employ his methods without written permission.

On gradients that can only be accurately described as ‘naughty’ our young hero for the day appeared to ride at a single pace from the bottom of the climb to the top.

While silky Polish climber Rafal Majka and Belgian Dylan Teuns eyed each other up for the race win Rodriguez spun up from behind, spun level, and then spun away off into the distance. For a guy who’s never won a bike race before, he sure seems to know how to win a bike race.

No one could have seen this one coming.

Apart from anything, he has that generic Spanish name. Oscar Rodriguez. My conservative estimates suggest that as many as one in three male Spaniards (and one in five female) are called Oscar Rodriguez.

It is not memorable, is what I’m saying.

Even Oscar’s own mother, when asked to comment on her son’s first pro victory, needed reminding who he was. Y’know the fella…Spanish looking…spinny-legs…god-awful black and flouro cycling jersey.

The only blot on an otherwise entertaining win.

I understand that Euskadi Murias are a small team, on a small budget, but did they really have no choice but to kit their riders out from the local charity shop?

Behind our unlikely winner the GC battle took place in slow motion, on steep, steep slopes. Vuelta style. Towards the summit Nairo Quintana emerged a little further from his recent cocoon of lethargy* to show himself to be in the kind of consistent form we haven’t seen for a couple of years.

Simon Yates, just behind him, was next best.

Post-race, Alejandro Valverde, Quintana’s teammate of course, was asked whether today demonstrated that the Vuelta is to become a battle between Yates and Quintana.

“…and also one other,” was Valverde’s reply.

You’re talking about yourself aren’t you Alejandro?

*Cocoon of lethargy. What? It’s a very normal phrase. It’s a perfectly normal use of the English language. I’m thinking of copyrighting it. If commentator Paul Sherwin can have his ‘suitcase of courage’ then I’m having my ‘cocoon of lethargy.’