When it comes to cycling in Cumbria, it’s a love/hate relationship.

I love the wild and challenging roads and the anti-establishment belligerence of the sheep. I hate its inability to meet recommended minimum quality standards on coffee. I could also live without the incessant rain and the solid uniform of Gore-Tex.

But mainly it’s the coffee.

Three of us headed up there recently with a plan: park up, lay claim to Great Dun Fell and Hartside by bike – two of the jewels in the Cumbrian crown – and get out again without anyone attempting to serve us a “Cappuccino” made with instant granules.

A kind of guerrilla raid, if you will.

Bizarrely, the temperature was 20C, and there was barely a breath of wind. Shorts and short sleeves were worn, a gilet was utilised only for the two big descents, and at no point were my toes or fingers numb.

In what might be a Cumbrian first for me, at no point were the heavens cursed and my survival was never in the balance.

As if to add to the surreal vibe, I was all but surrounded by well-dressed cyclists.

In Cumbria, you see, even if clothing isn’t Gore-Tex it’s resolutely functional. And by functional I mean dull, practical, and eye-bendingly ugly. I get it, of course – Cumbrian weather requires Cumbrian clothing – but it offends my eyes.

Cycling kit is a can of worms at the best of times, even when you’re making the effort.

And yet on this occasion the cyclists of Cumbria had pulled out all the stops. I saw Rapha, Isadore, and Café du Cycliste. I even spotted a black-and-white Peugeot chequerboard a la Tom Simpson

A kind of Yin to the Yang of the ramblers and fell-walkers, with their Bear Grylls combat pants and his ‘n’ hers fleeces.

And finally, came the piece de resistance. As I stuttered in to the post-ride café, warily, and with a copy of the Trade Descriptions Act to hand, I spotted an espresso machine behind the counter.

I eyed it suspiciously.

Was it for show?

Was there a kettle and a jar of Nescafe, hidden from view, and about to be pressed into service?

I ordered two Cappuccinos, with that raised-at-the-end-inflection which turns “two Cappuccinos please” from a drinks order into an incredulous question.

“Oh dear God,” I said to my fellow cyclists, “what are we about to be served?”

Three minutes later, they arrived. The proper colour, the correct froth, and with a tiny biscotti propped on the saucer. Three cappuccinos. As if whisked in by a Milanese barista on a private plane.

For a moment, I wondered if we’d mistakenly crossed county lines and were currently supping superior coffee in Yorkshire. I looked up, to get my bearings, and my eyes landined on the sign outside the local pub – the Shepherds Arms. 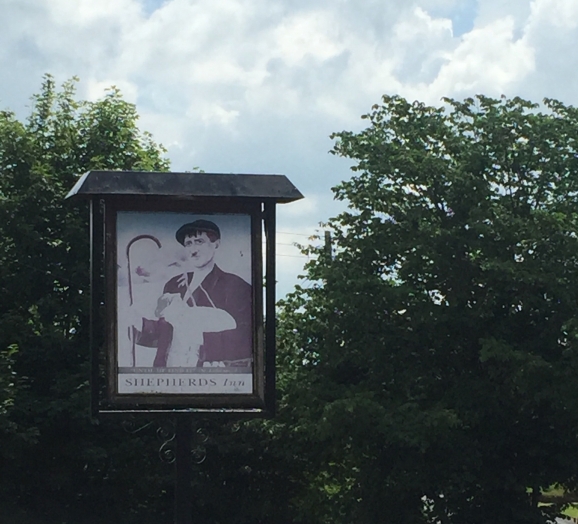 To be met by the gaze of none other than Adolf Hitler.

Just when you think you’ve got the measure of this place.