We imagine kids kicking a ball around a beach, the famous yellow shirt, and Carlos Alberto arriving from somewhere way off to the right of the TV screen to smash home that goal in the 1970 World Cup.

We don’t usually think of cycling.

But then in 2016 the Rio Olympics threw up a couple of bike races of such drama and excitement as to put Brazil briefly at the centre of the cycling universe.

To cycling fans, Brazil now conjures up images of a sweaty climb through the jungle, a treacherous and cyclist-maiming descent, and a long gritting of the teeth down the Copacabana beach front to the finish line.

Cycling-wise, Brazil is on our map.

Am I imagining it, or does this jersey – the Santa Catarina SC II /01 – offer a subtle nod to the stylings of a football kit?

I must confess that, as a rule, I’m no fan of writing on clothes, never mind on cycling kit. For some reason, with this offering from Kirschner that rule goes out of the window.

Maybe because of the just-so font? Maybe because the references are Brazilian and so have that semblance of exclusivity? Maybe, just maybe, I’m over-thinking it, and it just looks good because it looks good?

For the record, Santa Catarina is a state in southern Brazil, where the majority of the population descends from the European settlers. Kirschner acknowledge the European influence on their website, describing: “a stylish and functional kit, transplanting European cycling heritage to new and fertile lands.” 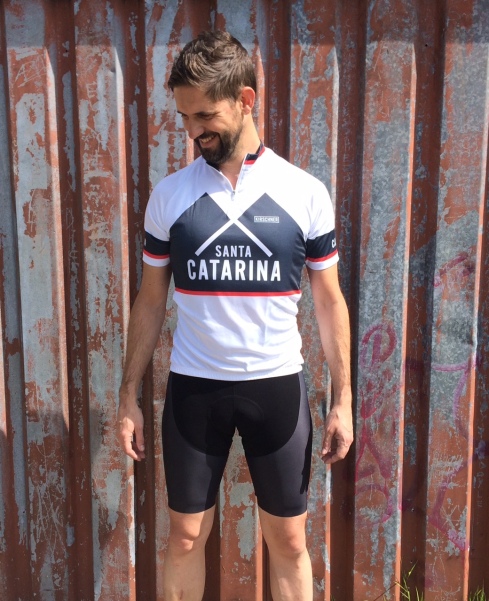 Weighing in at $116 you should, of course, expect some quality for your money – looking good is one thing, but are you paying for substance as well as style?

Brazilian kit, made in Brazil from a breathable polyester, and priced in dollars – the fact is, I didn’t have much of a reference point.

But straight from the packaging the material and construction feels like decent quality; better than your basic, bog-standard cycling jersey, and worthy of a few extra dollars.

On your back, and out on the road, what else grabs the attention?

Well, it looks great, for a start.

Here in the UK you have to pick the right day of weather to wear white kit, but it’s a head-turner, as much for looking a bit different to most other kit, style-wise, as anything else.

It doesn’t fit any of the usual pigeon holes – it’s not classic stripes, plain and sleek, or bright and garish – and it looks original.

The jersey has nice deep pockets, reachable and secure, and includes a zip pocket for valuables.

The overall fit is clingy but with just a touch of generosity all round. In my usual size Large (I’m a 40 inch chest) it’s not race-fit but neither is it baggy enough to leave you flailing in an aerodynamic black hole when your mates up the pace on the way to the café.

It’s a civilised fit, without being relaxed.

It’s worth mentioning that the sleeves are on the short side; designed to be that way, but in contrast to much of the crook-of-the-elbow length that you often find here in Europe these days.

The collar, in contrast, is fairly high. This gives just a touch of the café-racer look, but also acts as a handy protection from the raging sun on the back of the neck.

Admittedly more of a problem in Brazil that England, but we live in hope!

All in all this is a very smart, stylish jersey, with a touch of quality.

It also shows early signs of a being a good durable piece of kit for a sunny day, and if you want to make a style statement with an alternative to the usual suspects, Kirschner definitely have that off-the-beaten-track rarity value going for them.

Now, IF ONLY I had the chance to test it out along that Brazilian jungle road, before descending down to the Rio beachfront for a post-ride beer!

I live in hope.