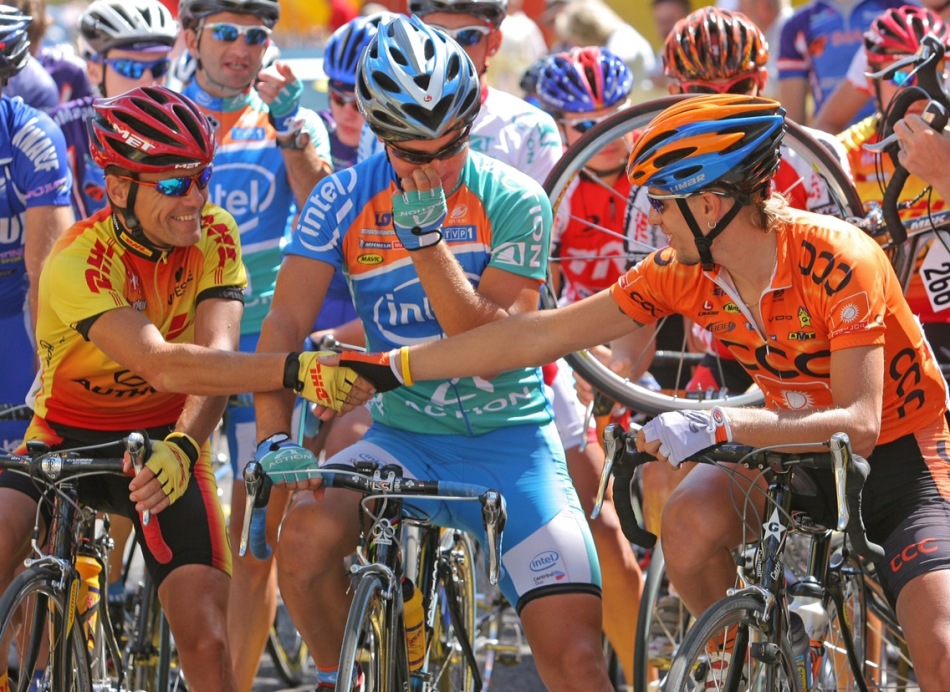 You have a favourite brand of cycling helmet

I’m not debating their usefulness – I myself wear one every time I swing a leg over my bike – but I can barely remember what brand it is. I have almost no opinion on it’s style, or which pro cyclists wear it, or how much it weighs, or how well vented it is.

Do not waste your time, effort, and good taste in trying to develop an affinity for a helmet, as if it’s cool like a jersey, or a gilet.

Just accept it as a necessary evil and ask yourself one question: do I look like a mushroom head?

If you do, get rid of it and get a different one. If you don’t, it’s fine. Nothing more.

You’re talking to me about your cadence

If you want to discuss cycling with people (and, let’s be honest, you do) then there are dozens of niche topics to dig in to – classic bikes, 90’s style, steel bike frames, how to pronounce ‘Omloop het Nieuwsblad’ – just take your pick.

For those with an affinity for maths and physics, gear ratios is always a good one.

But please, don’t engage me in conversation about cadence; basically, the speed at which you spin your legs around when you ride.

By all means take an interest in your own cadence.

You may subscribe to the spinny style of Lance Armstrong (although hopefully you aren’t combining that with heavy EPO use), the super-super-spinny style of Chris Froome (waggly elbows n’ all), or the slow grind of Alejandro Valverde*.

But I don’t need to know about it.

Who gets to the top first? Who looks good doing it? Who chooses the likes of Armstrong and Valverde as role models? These are things I’m interested in.

What RPM you’re maintaining in the process is of no concern.

* I’d also like to apologise for planting the mental image of Valverde engaging in a slow grind.

You are trying too hard.

If you think ‘style’ involves matching your kit to your bike, you’re doing it wrong.

Follow that rule and you can only ever wear kit in the same colour scheme as your bike. And yes, I am aware that this a hot new entry in the top ten of first world problems.

The key is for bits of kit to match bits of bike, with a couple of extra will-they-won’t-they colours thrown in. Some will work, some might clash, but if you don’t try you’re not even in the game.

I once knew a chap – a top level amateur racer, no less – who decided black and white was the look for him. Black bike with white seat and bar tape. Black kit with the odd flash of white in it. Black shoes. White bidons.

This man could wipe the floor with me on the bike, largely because I would immediately feel drowsy in his presence, so tedious was this geometric, binary, non-style of his.

There are some great colours out there in the visible light spectrum – red, orange, or green, for example – so why stick with black and white?

Throw a bit of burnt orange in there for the hell of it.

You can’t decide whether to shave your legs

Stop worrying what people will think.

You’re a cyclist, and they already think you’re weird. You owe it to yourself to either go full weird, or back off slightly, but on your own terms.

They can’t ride 100 miles. They don’t know about the mystical nature of Mont Ventoux. They have never seen a cobblestone and got a weird phantom ache in the palms of their hands.

What do you care what they think about your shaved legs!?

And while you’re at it, why not splash out on that Mario Cippolini leopard print skin-suit you’ve had your eye on.

You’re surprised when your favourite rider gets busted for doping

Be disappointed, be upset, be incandescent with rage, but don’t be surprised.

And just to complicate matters, some sports people who are doping (by any normal standard of the definition) aren’t actually doping, because of the way the rules are written.

And some sports people who aren’t doping (because they’re treating a medical condition, for example) are actually doping. Because they’re curing their chest complaint with aviation fuel instead of Night Nurse.

So watch, or don’t watch, or suspend your disbelief, or vent your cynicism.

But don’t be surprised.