In August, a friend and I rode up the Col du Galibier.

Because we rode from St Michel du Maurienne we also rode up the Col du Telegraphe first. And once we’d descended the Galibier the only way back out was to summit and descend the Telegraphe again. This is a fairly standard ride. Albeit one with a fair bit of climbing.

(Before you yawn and click elsewhere, this is not one of those pseudo inspirational/life affirming pieces about conquering a mountain or achieving a goal. Bear with me).

After descending the Galibier we were understandably hungry and so stopped in the town of Valloire (nestled on the road between the Galibier and Telegraphe) for a bite to eat. My friend, even knowing my voracious appetite and propensity for eating quickly, made the hilarious decision to share a platter of local delicacies with me. The altitude had clearly confused him.

He barely got a look in.

As we relaxed and reflected on the majesty of the Galibier we both inadvertently flicked that switch in our heads from ‘up for a challenge’ to ‘…aaand relax’. Also, bearing in mind that one of us is over forty and the other is very nearly, our aching joints and muscles began to seize up.

After half an hour of eating a drinking like a king (me…not so much him), the five kilometres of ascent back to the summit of the Telegraphe, and the twelve kilometres back down the other side had become less ‘all part of the fun’ and more ‘unnecessary addition to an already big day on the bike.’

But then a surprising thing happened.

We steeled ourselves for a painfully slow grind upwards and found that, perhaps because we’d already spent most of the day riding uphill, another five K’s passed before we’d even had chance to start properly suffering. Quickly, in other words.

Which left us with the descent.

What we thought would be twelve tedious kilometres to our car parked at the bottom turned out to be a joyous swoop and glide down who-knows-how-many curves, hairpins, and kinks in the road. Each corner drawing you into the perfect line before sling-shotting you out the other side with a pat on the back and a whoop of encouragement.

I don’t believe it’s physically possible to descend the Telegraphe without a smile on your face.

I strongly suspect that the tarmac was laid for the sole purpose of giving cyclists something spectacular to ride down, before they noticed the town of Valloire over the other side and decided they might as well join up road to town while they were there.

Our descent was improved by the addition of three fellow cyclists to cat and mouse with.

There was a reckless Frenchman (he was riding a Look bike…what other nationality could he be?) who took the wrong line on every corner, got far too close when he overtook, and neglected to wear a helmet; there was a cyclo-tourist with panniers and a death wish who made up for his aerodynamic disadvantage with some clever use of ballast and gravity; and there was a non-descript man of indeterminate nationality on an anonymous bike.

We bobbed and weaved our way to the valley below, taunting each other good naturedly and only ever-so-slightly risking one of our nine lives – that’s cyclists too, right…not just cats? 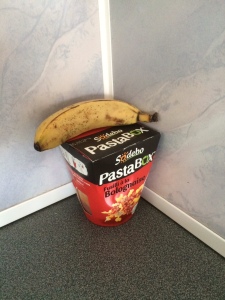 To top it all, our car was still parked at the bottom and hadn’t been either towed or stolen. Who’d have thought, as we sat (and I ate) in Valloire, basking in the glow of the Galibier, that the best bit of the ride was still to come.

My friend celebrated this winning end to the ride in the only way he knows how – a trip to the supermarket in St Michel du Maurienne for a crate of Kronenberg, a Pasta Box, and a banana (he’s finally learnt that if you eat with me, you eat alone).

And yes, this is the same guy who first discovered the merits of a mid-ride pasta box on the summit of La Planche des Belles Filles. He is single handedly keeping the French pasta box industry afloat.

A classy day out all round.