Or maybe the other one?

Around these parts cyclists are ten-a-penny; most of the time we simply blend into the background. Occasionally, however, we end up sticking out like sore thumbs.

I’m not talking about those of us who choose to wear fluorescent yellow shoes – we bring it on ourselves – but sometimes the clash between cyclist and civilian comes very much to the fore. Often this happens on busy roundabouts or in rush hour, and involves a conversation of varying degrees of civility about road tax and riding two-abreast. But sometimes it strays into more polite surroundings.

This particular day in the calendar conjures up images of hazy early summer sun, picnics, and paddling in streams. Which is odd, because nine times out of ten it is raining sideways and the thermometer is firmly lodged in single figures. This year was no different, but I was in bullish mood.

I decided that Mother Nature needed putting in her place, and at nine-thirty in the morning I was kitted out and steeled to head out into the downpour. The afternoon forecast, miraculously, suggested sunshine. ‘I’ll just grit out the first two or three hours’ I decided, banking on the improvement in conditions to dry me off and warm me up.

An hour and twenty down the road, and by now in Cumbria, I was suffering.

The rain was such that I felt like a clown in a particularly brutal circus; pedalling along dutifully while someone chucked buckets of cold water in my face. My audience consisted of a few bemused and equally wet dog walkers. I didn’t see a single fellow cyclist.

On reaching the town of Kendal I dived for respite into the first coffee shop I saw.

I stumbled to the counter, fumbled for my money, and mumbled my order through frozen lips. As I looked around the shop it seems my sodden entrance was the main event. I was surrounded by civilised looking customers surprised and amused at my weather beaten entrance, coffee cups stalled half-raised to their mouths, peering over newspapers, and giving each other the ‘look at this idiot’ raised eyebrows.

I half chuckled to my audience. “It’ll be sunny in an hour” I announced, whilst standing in a puddle of my own rainwater. A ripple went round the shop along the lines of ‘in yer dreams, mate’. A couple of polite enquiries followed asking where I was heading and how long I’d been out, before I was allowed to fade into the background and get on with managing my uncontrollable shivering. 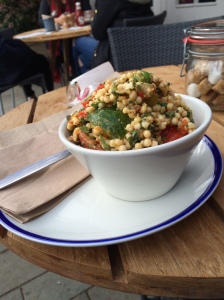 Couscous, the food of the middle-class cyclist… (Image: ragtimecyclist.com)

Twenty minutes later and marginally warmer than when I entered, I decided I must push on now, or be broken and head home. Trusting the BBC Weather App with what seemed like my life I headed for the next café, an hour and a half down the road.

By the time I reached ‘Chesters By The River’ in the village of Skelwith Bridge I was delighted to have survived long enough to have lunch, and suddenly self-conscious about the high end café I’d chosen. I weaved between the BMW’s and Mercedes’ in the car park, parked up my bike, and took a seat amongst couples quaffing white wine and dining on quiche, quinoa salad, and focaccia.

Again, a puddle of rainwater formed around my feet, and steam rose from my slowly warming shoulders. As feeling returned to my limbs I started to enjoy my role as something the cat had dragged in and, miraculously, the clouds began to part and the sun to shine.

I get the feeling my very presence spoiled the civilised lunch of one or two sitting near to me, but the waitress was wearing a cycling t-shirt with the slogan ‘ride it like you stole it!’ and I sensed I had an ally amongst the moneyed tourists.

Did I imagine the extra helpings of couscous salad being piled in to my bowl?