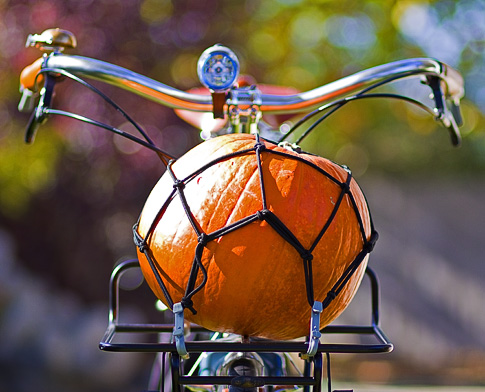 I generally take the view that a spot of eccentric behaviour from time to time is good for the spirit, and should be encouraged. Whatever you get up to in your own time is fine by me, and If you can entertain and amuse into the bargain then so much the better.

And then credible rumours started to filter through that a friend of mine was engaging in a one-man fancy-dress themed vegetable-fuelled crusade.

And suddenly you start to wonder.

As anyone familiar with the UK and our love of a good drink on a Friday night will know, at this time each week our town centres are largely populated by feral revellers and under-dressed alcohol-fuelled party animals. To traverse the town centre sober and not engaging in the general debauchery puts you in the firing line.

The fact is that someone who is merely getting from A to B, and conspicuously not punctuating their journey with a beer in every pub, will find themselves singled out as ripe for attention by the party goers.

The key in this situation is to avoid drawing attention to yourself.

And yet my friend was engaging in behaviour which could be described as bold, at best, and suicidal, at worst. Apart from anything, riding around town on a bike, alone, and dressed as a giant pumpkin, is no way for a grown man to behave.

As he is a committed and principled vegan my first thought was that this must be some kind of lone protest: perhaps a visual metaphor for the benefits of a meat-free existence, the subtleties of which were lost on me. If you’re going to run the gauntlet of the fabled Friday night town centre then it might as well be for a good cause, I suppose.

‘Maybe he should be applauded’, I thought to myself, ‘for the concept if not for the execution, but I just don’t see this ‘Pumpkin On A Bike’ campaign catching on. I don’t get it.’

It wasn’t until a few days later that I heard about the most recent ‘Critical Mass’ bike ride here in Lancaster, and it’s Halloween theme for November.

‘Critical Mass’ is a bike event that takes place in over 300 cities across the world, and happens every month here in my home town.

The original aim of ‘Critical Mass’ was to draw attention to how cycling unfriendly many cities can be. The event has since morphed and developed so that these mass bike rides can be protests, celebrations, or simple spontaneous gatherings; often just a way for cyclists to come together and be seen and heard.

My friend claims that he had every intention of joining the ride, and had dressed up in a big pumpkin-esque orange coat to help get into the spirit of things. His error was in turning up late and circling the city alone, in full pumpkin regalia, in search of his fellow cyclists.

I still have my suspicions that this was his doomed attempt to launch his pumpkin based protest, and the ‘Critical Mass’ story line was a convenient counter-narrative to cover his blushes.

Rumours that he once spent a week camping in France disguised as a string of onions are, as yet, unfounded.