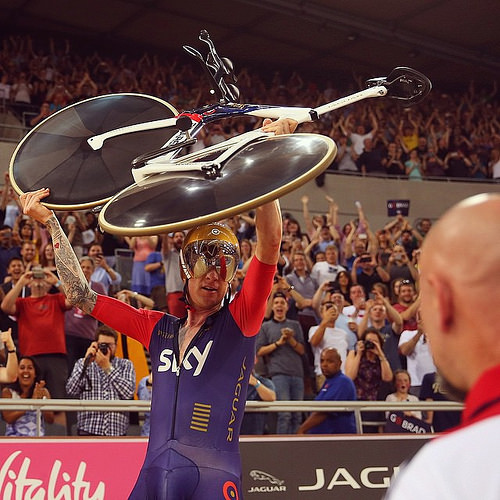 The 2015 pro-cycling season is over and there is no racing to talk about, which leaves a gaping chasm to fill in the cycling press.

Of course there are the usual transfer rumours, stories about disc brakes and electronic group sets, the weekly cyclist v motorist debate, and grand announcements from Oleg Tinkoff about what his star riders will be up to next season.

This is all fairly standard media coverage and fits into the category: ‘there’s-no-racing-going-on-what-the-hell-should-we-talk-about?’

And then you get the next level – what might be charitably called ‘column filler’.

And so whilst idly flicking through my favourite cycling websites this week I came across a short and fairly insubstantial piece about what Bradley Wiggins has been wearing on his feet at the recent European Track Cycling Championships.

Some rather fancy bespoke carbon shoes, for the record.

Yes a second, completely separate article, published on the same day, but this time about socks. Or lack of them.

However, after a little more reflection I wonder if perhaps I’m underestimating the impact of this news.

I’m well aware of how strongly some cyclists feel about sock cuff length. Could it be that that Wiggins and Co’s choice to ride their bikes whilst not wearing any socks means we have something approaching a diplomatic incident on our hands? Apart from anything, a lot of cyclists have spent a lot of hard earned cash trying to up their ‘sock game’ (as I believe it’s called) –  rule number one of which is the gospel of 6 inch cuffs.

Where do we go from here?

Sir Bradley has long been an arbiter of cycling style, and now all that we once held as the immutable truth about sock cuff length may have been tossed aside in the course of a single track meet. Are we seriously considering making the jump from calf length cuffs to no cuffs at all?

Have we run this past the committee?

We need some clarity. We need a ruling from the Velominati, and from Rapha, and we need to find out what David Millar thinks. This is all just so out of the blue!

OK, sorry, calm down, I’ve gone too far the other way now haven’t I?!

This is what happens, you see.

When there’s no actual racing to talk about it’s easy to spiral out of control and lose a sense of perspective. Oh, and by the way, if you’ve no idea what I’m on about when it comes to permitted sock cuff height then well done…that’s to your credit!

One thing I did learn in all this media generated fluff is that there are a pair of cycling shoes out there on the open market which cost $2,000.

Aussie pro-cyclist and everyone’s favourite consecutive Grand Tour completing hard-man Adam Hansen (13 and counting…) has long been known for making his own carbon shoes, apparently moulding them with his bare hands to the exact contours of his feet.

Not only do these shoes make the claim to be lightest cycling shoes known to man (less than 96g, apparently), he’s now selling them on his own website for $2,000 dollars a pop.

I might slip a pair onto my Christmas list when no-one’s looking, just to see. But hopefully before then, we can all get back to wearing socks of the appropriate length when we’re riding our bikes.

And then not long after that, with a bit of luck there’ll be some bike racing to talk about.

13 comments on “What Would Wiggins Wear?”