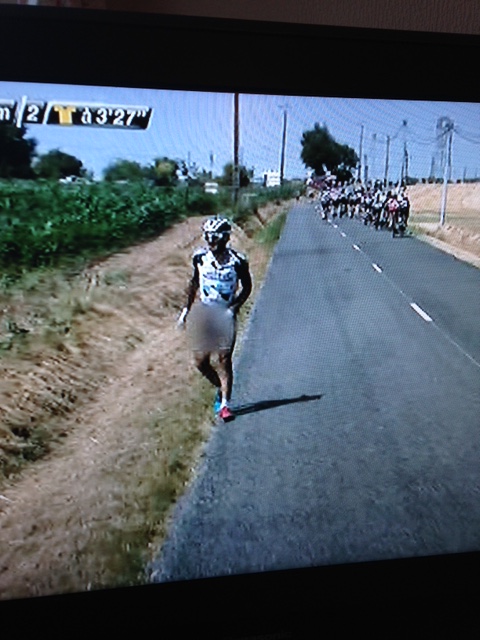 Stage 10, the day after the first rest day, was the day Chris Froome won the 2015 Tour de France.

Ok, that’s a bit premature, and a lot can happen yet…and it only takes one bad day…and he only has to suffer a crash or a mechanical at the wrong moment…etc. etc.

But basically, most of us installed him as the race winner after the climb to La Pierre-St Martin, where his single devastating attack saw him ride away in to the distance on the final climb to beat his rivals by a couple of minutes, and leave 50% of fans open mouthed in wonder and the other 50% crying foul.

Which became something of a theme for the week.

As the race ploughed through and over the mighty Pyrenees it found its high point for 2015 – literally, altitude wise – in the form of the Col du Tourmalet at over 2100 metres in height.

Despite the accompanying fanfare, the limelight was well and truly stolen by a herd of large, and somewhat belligerent, cows.

I have long had the feeling that cows are the real deep thinkers of the animal world, who present us with a largely serene, mournful, and compliant image which is just a front for something more complex. This might be the week when that turns out to be the case, and the balance starts to tip in the human/bovine relationship.

Firstly, as I was out for an evening ride here in Lancashire on Wednesday evening, I stopped in the evening sun to take a picturesque photo of my bike. Imagine my surprise when, the very instant I snapped the image, a particularly thoughtful looking cow peeped over the wall and ‘photo-bombed’ the moment.

Take a look at the picture and decide for yourself, but I took this to be some kind of warning.

I returned home to watch the TV highlights of the Col du Tourmalet stage and what did I find?

On the descent of the Tourmalet the aforementioned herd stepped into the road, forcing Warren Barguil, among others, to take evasive action, as if to say:

“You may think that all this kerfuffle is important, but it’s just a bike race. You ride these roads with our permission…we’re in charge here.’

You think I’m reading too much into this?

Maybe we’ll find out more in the Alps.

On the following day’s stage, which finished on the punishing climb to Plateau du Beille, the phoney war came to an end and the riders were finally tested; gone were the scorching temperatures and wall to wall sunny skies, and out came the proper weather.

As regular readers may have picked up I’m from Lancashire in the north of England, which meant that my face lit up as Stage 12 was subjected to the kind of heavy rain and hail which counts as standard riding conditions in my part of the world – as if thrown in by the race organisers to truly sort the men from the boys.

An honourable mention goes to Chris Froome – still in yellow, of course – who, at times on the rain slicked roads of the final climb fought off attacks from his main rivals almost single handedly.

But the spoils, and the title of honorary Lancastrian and all-round tough cookie, went to stage winner and Spanish mountain goat Joaquim ‘Purito’ Rodriguez.

As the race left the Pyrenees and tackled the kind of terrain which to your average Tour de France rider is a ‘transition’ stage, and that we mere mortals might describe as a ‘bloody hard day on the bike’, veteran Frenchman Jean-Christophe Peraud was the real loser.

As the crosswinds battered the road between Muret and Rodez he suffered what initially looked like a fairly innocuous fall, but which TV picture showed to be something rather more nasty.

The red raw loss of skin on Peraud’s lower body certainly looked like it might’ve smarted a bit, but as this photo from the ITV coverage here in the UK shows, credit should go to the team doctors who managed to successfully pixelate his crotch for the benefit of squeamish TV and roadside spectators.

One can only wonder at the horror that lies beneath that blurry circle.

So, as week two draws to a close (also including, as it did, the first Tour de France stage win for an African team, and on Mandela day no less) Chris Froome still wears the yellow jersey.

This is despite having faced frequent sniping attacks from his main rivals, nothing but criticism and barely disguised insinuations of cheating from the (largely non-English speaking) media, and a cup of urine thrown in his face by a spectator for good measure.

As routine Grand Tour wins go this one is turning out to be quite eventful.