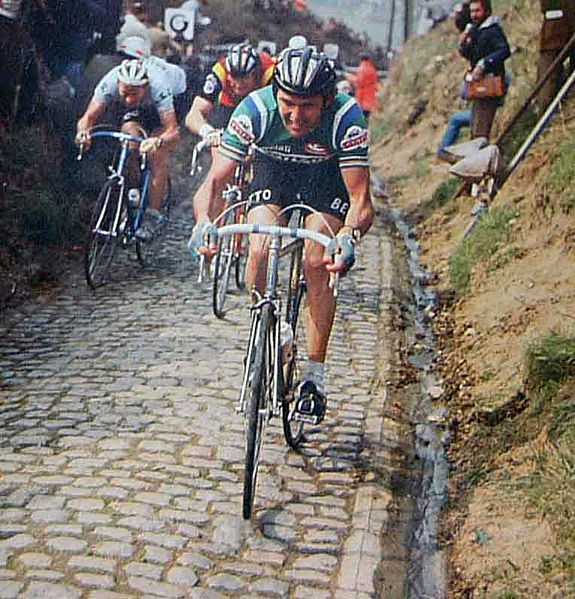 I’ve written before about my love of riding my bike across a smooth pristine road surface – waxing lyrical about the swoosh of tyres on tarmac, and worrying my loved ones with the dewy eyed look it puts on my face.

But in the world of pro cycling we are now at that time of year when we celebrate and glorify what are essentially, frankly, appalling road surfaces on which to ride a bike.

The cobbles of northern Europe, for example; celebrated and revered each year as a major element of a series of one day bike races which are not for the faint hearted.

Now, I grew up and live in the north of England, where the cobbled alleys between streets of terraced houses have become a sepia toned symbol of the region – I know a thing a two about cobbles.

Admittedly, the alleys which run near my house are only around 100 metres long so you could argue they don’t quite bear comparison with the Forest of Arenberg, or the climb of the Koppenberg, but I’d confidently say that no-one can negotiate these short sections of urban pave* whilst simultaneously weaving around the cat from next door and a variety of wheelie-bins and parked cars, quicker than me.

But still, I don’t ride on this stuff for pleasure, and neither does anyone else I know; Paris-Roubaix and the Tour of Flanders, with their great long stretches of cobbles which diligently sort the men from the boys, are great spectacles, but give me my pristine ribbon of silk any day.

In recent years even southern Europe is getting in on the act, utilising the white gravel roads of Tuscany in Italy. I suppose at least when riding Strade Bianche the riders are liable to feel a bit of warm sunshine on their backs to mitigate road surfaces which are reminiscent of the worst of the country lanes here in Lancashire. Yet because these gravel death-traps wind their way through the hills and valleys of Tuscany they are apparently romantic, rustic and picturesque.

Admittedly if my Sunday morning ride ended with a stiff climb into the historic town of Siena – the spring sunshine gently warming the pavements, the cafés abuzz with morning gossip, and a post ride espresso awaiting – I’d be inclined to see the romantic side too.

The problem is that if I were to simply fly south to partake in a bit of this cycling civilisation (a Gran Fondo amateur sportive takes place the day after the pro race) at the end of a long northern winter and having had little quality sunshine to speak of, it’s likely I would spoil the mood in the square of Siena with the dazzling glare of sunlight on my pasty-white skin.

The fact is, my northern English complexion in amongst all these Latin types might just lower the tone, but there is a kind of symmetry here. The idea of the ‘white gravel roads’ of Strade Bianche just happens to describe the colour and texture of my winter complexion to a tee.

So while you might find me watching these great one-day spectacles from the comfort of my own settee, when I’m out on the bike I’ll be busy continuing my search for the holy grail of smooth Tarmac perfection.

And hopefully working on my tan too.

10 comments on “A celebration of appalling road surfaces”